Labels have come up quite a lot for me in the past, and it is something I have been greatly challenged by. Most notably when I was first diagnosed with Bipolar 1 Disorder. Most recently, when my textbook called those with psychological disorders dysfunctional and disturbed. 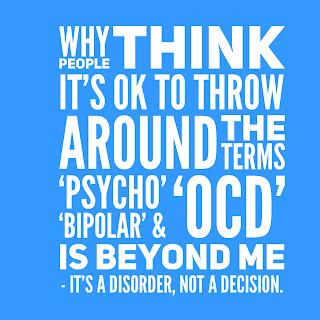 Labels can often offend - that is labels of any sort, not just the mental health variety.Come on though. Why people think it's ok to throw around the terms 'Psycho', 'Bipolar' & 'OCD', is very much beyond me - it's a disorder, not a decision. (says the girl that has a 'cute but psycho' shirt haha but I'm allowed to make fun of myself right?)The stigma associated with labels can be debilitating at best, and that's without dealing with an illness.Part of me wants to say f*ck labels. But. . . Labels do have a place.
If it wasn't for a label I probably wouldn't have received the psychiatric care I so desperately needed. I wouldn't have been able to build a path to recovery or maintain long term coping strategies. In all, I would be no further forward without a label.As my psych textbook states: 'Therapists and others use disorder labels to communicate with one another using a common language, and to share these concepts during research. Clients may benefit from knowing that they are not the only ones with these symptoms.'Now if only we could release the stigma that comes with a label! My biggest distress prior to being diagnosed, when by this point I knew something was terribly wrong, was label stigma. What would my friends, family, employer and others say about my new label. What would the consequences be of officially being mentally ill. I didn't know, and it terrified me. Flashes of future job prospects and travel plans where marred by just a 7 letter word, a word that I now relate to. A word I have taken a long time to accept. It seems we often use labels out of context. For example, when we use the term 'running amok'. At least for me it means when someone's going a tad crazy, whether that be a night out on the town or just a little bit rampant. The term itself however, comes from the Malay language and is in fact considered a cultural bound disorder. "Amuck", was considered an illness brought on by an evil spirit. Those who suffer from it, were said to go into a "homicidal frenzy".I'm hoping I can look at labels with fresh eyes and not succumb to using them in the wrong manner from now on. One step closer in stopping stigma! Love xo